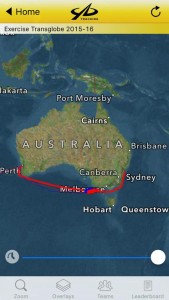 Many of you in Monxton and Amport will know Emily Bacon. Here is her report from her recent adventure in Australia.

In December 2015, Exercise Transglobe offered 17 army personnel a fantastic opportunity to crew HMSTV Discoverer in Australian waters, sailing over 2000 nautical miles from Perth to Sydney. The expedition also included the unique opportunity to enter the world renowned Rolex Sydney to Hobart Yacht Race, making the Australian leg one of the most significant of the entire expedition. 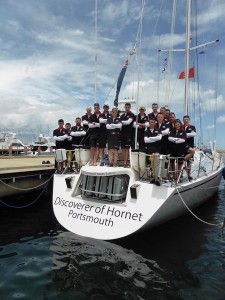 Before leaving the UK, it was required that all crew had to complete their Sea Survival Course and a RYA ISAF Offshore Safety Course, which both took place at JSASTC in Gosport. The courses taught us how to react in emergency situations – ranging from gas leaks to hurricane force winds. These courses were imperative as the Southern Ocean is notorious for its rough seas, and after the tragic events in the 1998 Rolex Sydney-Hobart race (which resulted in the death of 6 crew), it is now illegal to race without the crew completing the RYA ISAF Course. In addition to the courses, we had to apply for our visas, complete our military swim test and buy the appropriate kit. The night before our flight to Perth the crew went for a curry in Gosport, which was swiftly followed by a few celebratory beers to help make the 24hr flight less painful the following morning.

The first phase of the leg was delivering the yacht from Fremantle (near Perth) to Sydney (without stopping), through the infamous Bass Strait, predicted to take 12 days. During our stay in Fremantle, we spent 3 days finalising paperwork, familiarising ourselves with the yacht, crew & skipper and prepping the yacht for the delivery.

On the morning of the 7th December we set sail on our 2000 nm journey to Sydney. 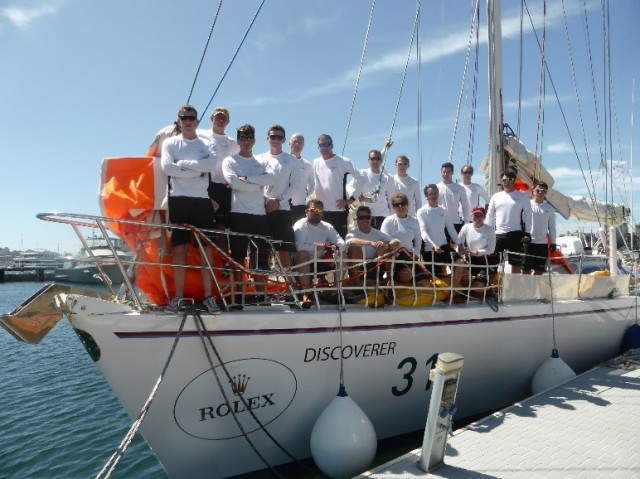 Following our departure the watch system was implemented. Each watch was on duty for 4 hours, then off for 4 hours, 24 hours a day. Every third day your watch would adopt ‘mother watch’ for 24hrs, where you would do all of the cooking and cleaning. At first we all found cooking 17 portions of chilli con carne at a 45% angle rather challenging, but by the end we were all pros – we even cooked kangaroo steak! 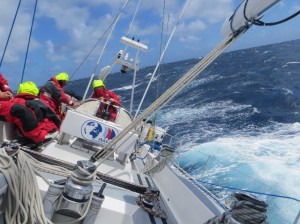 Despite a couple of birthday celebrations, including my 21st (a massive morale booster for myself and the rest of the crew), the sail from Perth to the entrance of the Bass Strait was fairly uneventful – we certainly didn’t experience the stereotypical Southern Ocean weather we’d anticipated, for a few days we even had to sail under motor because the wind died completely! However as we came out of Bass Strait and headed north towards Sydney, we faced a massive weather front –40 knots of wind, lightening & thunder and choppy seas in the pitch black night, putting all of our sailing skills to the test.

After 15 Days at sea we finally arrived in Sydney on the 22nd December, although not quite how we’d imagined – at 1am pouring with rain. We arrived in time to conduct crucial race prep & allow Christmas Day to be celebrated in true Aussie fashion, with shrimp clad BBQs. Festivities on the 25th ended with an early night to ensure we were ready for the race on Boxing Day.

We were blessed with Northerly winds allowing us to sail at significant speed in the direction of Hobart. This allowed us to gain a lead on our main competitor, HMSTV Adventurer, the second yacht participating in Exercise Transglobe, which was crewed by Royal Navy and RAF personnel. Unfortunately not long into the race came an aggressive wind shift and a strong Southerly breeze causing a third of the racing fleet to retire by the end of the second day & also resulted in a few of the crew going down with sea sickness.

The aggressive weather allowed us to make good speed, however the wind soon died. The light conditions that followed allowed Adventurer to reduce the 70nm lead we had gained during the heavier weather. This made for a nail biting finish in the early hours of the 31st. Despite being within 200m of each other at one point, Discoverer crossed the finish line 44 minutes ahead of Adventure. We arrived in Hobart on the morning of the 31st December, just in time to celebrate New Year’s Eve. The last few days in Hobart included debriefs, repairs and intense cleaning, all preparing the yacht for handover to the next crew, who were sailing from Hobart to New Zealand.

Exercise Transglobe continues to provide fantastic sailing opportunities to service personnel, one of which was the world famous Rolex Sydney-Hobart Race. The skipper, mates and crew of HMSTV Discoverer judged our Australian Leg of exercise Transglobe, to be a great success and a truly unforgettable experience. This expedition challenged me both physically and mentally, I have learnt countless new sailing & life skills and have met some incredible people. Overall, I would thoroughly recommend this expedition to all OCDT’s.

To watch the video of us competing in the Sydney-Hobart Race – click the link.

Have your say... Cancel reply

This site uses Akismet to reduce spam. Learn how your comment data is processed.